Carnarvon was awarded the WA-523-P permit within the Bonaparte Basin of Australia in May 2016, which included the previously developed Buffalo oil field.

Carnarvon initially focused its technical work on reprocessing the existing 3D seismic data set using state of the art Full Waveform Inversion (FWI) technology. This work supported the interpretation of a significant attic oil accumulation remaining after the original development because of potentially sub-optimal positioning of the previous development wells due to the seismic processing capability of that time. 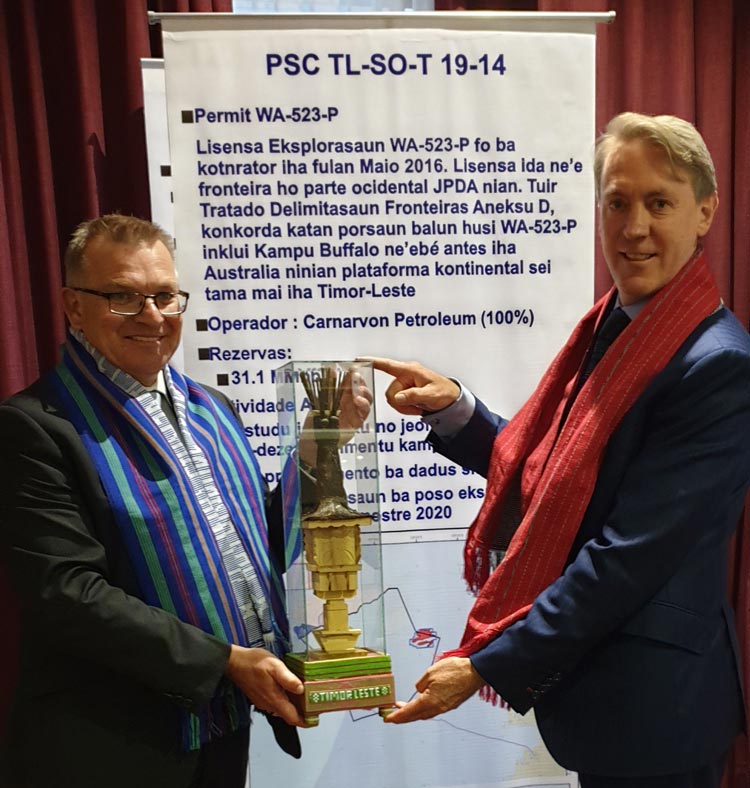 In August 2019, a treaty was ratified between the Governments of Australia and Timor-Leste which meant the Buffalo oil field redevelopment will occur under Timor-Leste juridication. One of the key conditions of the treaty was that the affected parties, such as Carnarvon, would be granted security of title with conditions equivalent to those previously in place under Australian domestic law. Importantly, Carnarvon’s PSC achieves a similar net back after government taxes and duties to Carnarvon, when compared to Australia’s offshore PRRT regime.

Plans to redevelop the Buffalo oil filed were materially progressed during the year. Preparations for drilling the Buffalo-10 well are well progressed with the well planned to commence drilling in October 2021. The well is being designed to target the attic oil remaining from the field’s original development.

A jack-up drilling rig has been selected and the Buffalo Joint Venture has signed a Letter of Intent (“LOI”) with the relevant rig contractor. A formal contract, consistent with the terms of the LOI, is now being finalised.

In addition, procurement of Long Lead Items (“LLIs”) has been completed, and significant progress has been made on procuring the remainder of the items and services for the well campaign. Considerable progress has also been made to secure the necessary Timor-Leste Government approvals for drilling the well.

Signing the rig LOI is a significant milestone for the Buffalo project. The LOI, along with the procurement of LLIs, has been essential in ensuring that the schedule is maintained.

The catalyst for this increased operational activity was provided through securing funding for the Buffalo-10 well. During the year, Carnarvon completed a 50% farm-out of the Buffalo project to Advance Energy PLC (“Advance”).

Following the farm-out, Advance will fund the Bufaflo-10 well up to US$20 million on a free carry basis. This means there will be no cost to Carnarvon unless the well costs exceed US$20 million. Carnarvon has also retained operatorship of the project.

The transaction is an important element of Carnarvon’s strategic objectives as the Company prudently manages its balance sheet in order to both drill the Buffalo-10 well and progress the development of the Dorado project.